088: Map an object with CamSchnappr

I use an early 32bit version of Touch to calibrate the camera und just copy&paste the CamComp to the newest 64bit version.

also the sort DAT is causing a problem

Hi Andrew.
We’ve made some recent changes + fixes to the Sort DAT which will be posted shortly.
Hopefully that addresses that particular issue.
Thanks,
Rob.

Just started playing with CamSchnappr this morning and figured something might be up. Looking forward to the fix. Also, super slick interface!

Note: The latest CamSchnappr version for can be found here

Awesome! Thanks for the quick update!

Ive got some problems whit CamSchnappr in the New TD88 version 6820.
Its look like the same problem as keithlostracco had.

The Problem is that there is no way to select the blue points and view the yellow lines.
In the attachment you wil see the error information.

The link between CamSchnappr and de Camera is also broken. There is no Matrix 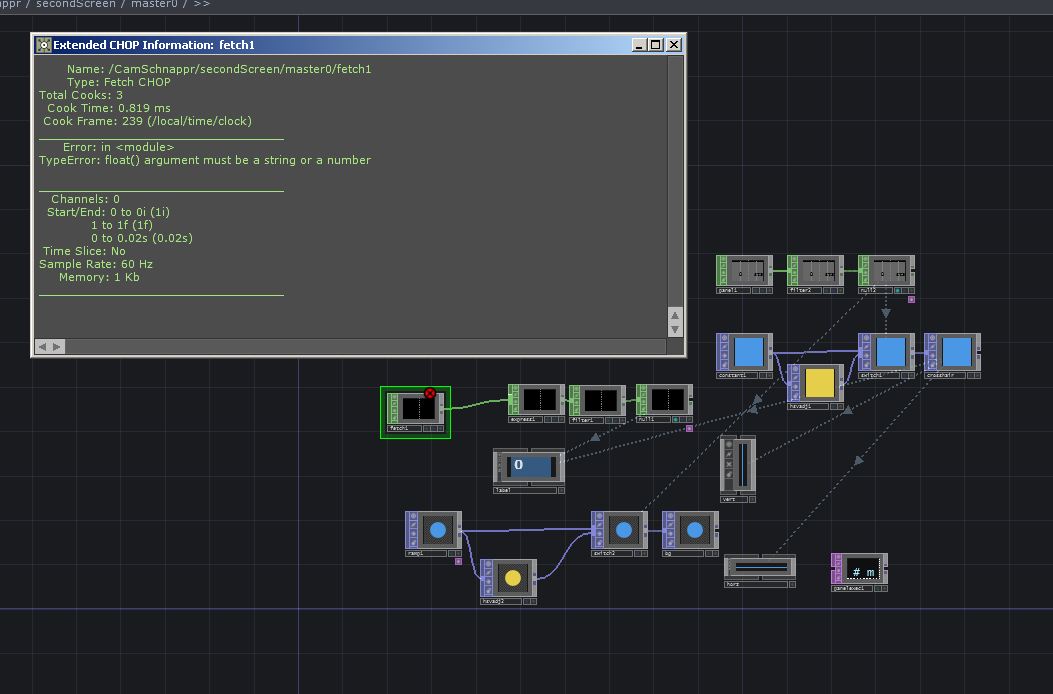 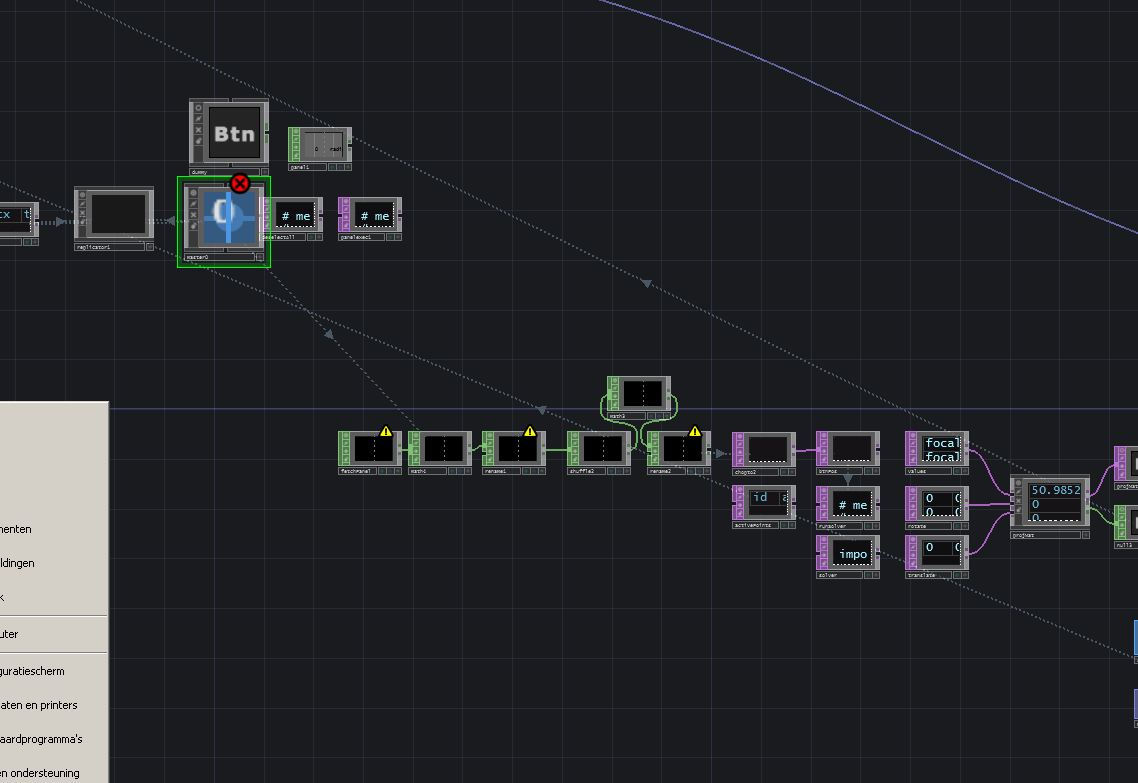 I too am having the same problem as Patrick in 6820.

/CamSchnappr/secondScreen/master0/fetch1 is having an error. However, the master0 network comp’s cook parameter is off when I go to check where the problem is coming from. I am only occasionally able to get CamSchnappr to export a matrix to my camera, however the matrix is always significantly off, even when trying various different points. I’m assuming this is an issue with the mapamok code not liking my particular model or geometry. Currently trying to diagnose the circumstance in which I am able to generate a matrix as opposed to not.

If I am able to get the matrix exporting to the camera, it happens on the 6th point, after which any point beyond 6 has no additional effect on the transformation. Not sure if this is intentional.
When it provides inaccurate transformation values, I remove points to try new ones, but when I get down to only 5 selected points, the values on the camera all change to zero and will remain zero even when I add a new, 6th point.

I’ve determined there are a few settings that will prevent the transformation matrix from exporting to the camera in CamSchnappr.9.toe, including specifying my own render top, changing the resolution of the existing render top, or even replacing my own SOP with the existing one.

Here is my .toe file with the SOP replaced in SampleGeo. Can you get it to generate a matrix after selecting 5 points? Perhaps something is wrong with my geo itself?

I havs also noticed that if you do not specify the inputs in the proper order (ie. Camera, Render, and SOP) it does not export a matrix either.
CamSchnappr.10_phil.toe (60.9 KB)

I found a rounding error which exhibited itself through your geometry. This attached release should fix it.

Note: The latest CamSchnappr version for can be found here

Thanks for the new version.
But There is nothing changed between the previous version. The error is the same.
Which version off TD are you ussing. Makes it sense ive I use the 32bit ore 64bit? 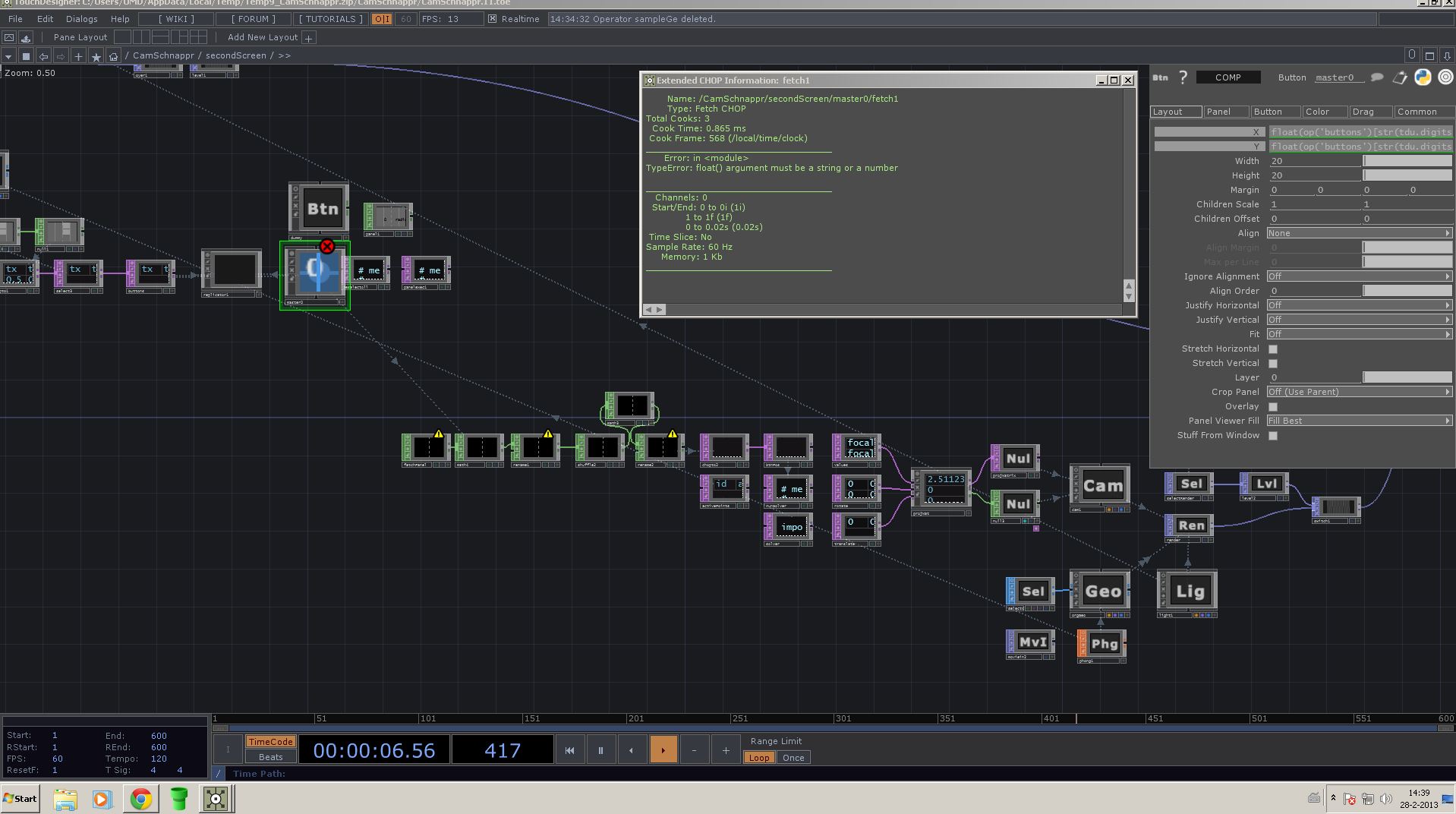 It is good to know that you have to use a Geometry Comp.
Ive use the whole time a Box Sop as a example geometry.

Thank you Markus for creating these create application.

OK guys. I’ve pretty much avoided SOPs in general because I just can’t wrap my brain around 3D. But this app is awesome and perfect for what I’m working on however after spending many hours experimenting with the MaterialSOP and others I can’t quite figure out what I need to to to make each surface in the model to be a different material.

I’ve been using KantanMapper until now where I simply drag and drop a texture to the polygon I want to apply it to.

I don’t need it to be drag and drop but is there a way to assign a different material to each surface in my model so I can achieve the same effect as Kantamapper but the ease of alignment of CamSchnappr?

Hi, Markus)
Great tool!!))
But does it work with lens-shifted projectors like Optoma EW610ST?

I can’t get any adequate match result with it…
thx)

Strange, I’m not having issues with my Epson Home Cinema 8350.
Could it be that the output resolution is somehow not correct?

I’ve used camschnappr with an optoma ew series projector with no issues.

Thx guys)) I will try to find out what’s wrong…