So the file you just shared, doesn’t show anything in the DAT for you ? 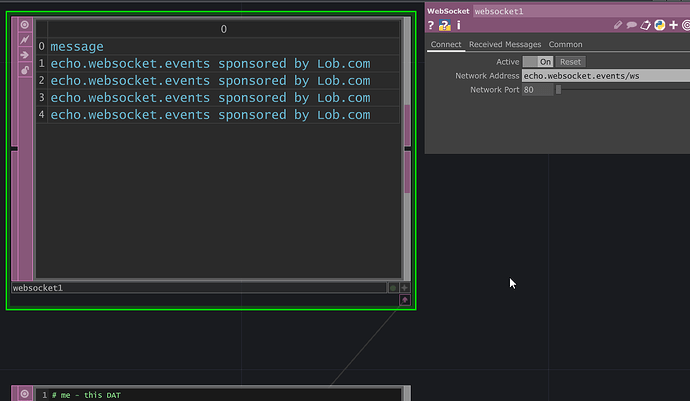 Could there be something blocking the port on your machine ?

Are you using some kind of streaming software like OBS or Stream.Bot… etc ?

No nothing like that prints in the DAT. There must be I guess. I have OBS installed but it hasn’t been running when using TD. I will investigate further if there is a socket being blocked or something similiar.

It appears that port 80 is open. Are there any tests I can do to see if something is stopping TD from communicating via tcp?

Edit: I can confirm this .toe file does not work on my mac either, nothing prints. I have Anaconda installed on both, perhaps that is the problem? Is there a command I can run in the textport to see what’s going on?

Can you try to see if things run locally:

Go back to process A:

Sure thing, both sets of parameters were kept at their default values.

An ID, address and some text in the properties column shows up in the signalling viewer. 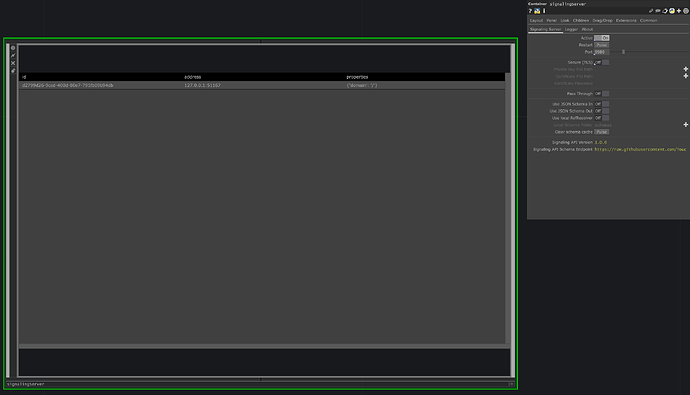 We output internal connection errors from the WebSocket DAT to the TouchDesigner text console, which can be opened by setting the environment variable TOUCH_TEXT_CONSOLE=1, then reopening TouchDesigner.

Could you retest with one of the examples where it was failing while the TouchDesigner text console is open, and send us any errors?

Thank you for the reply.

I’m sorry i’m a real noob, how do I set the environment variable?

Edit: Nevermind I worked it out. It looks like the connection is timing out almost instantly. 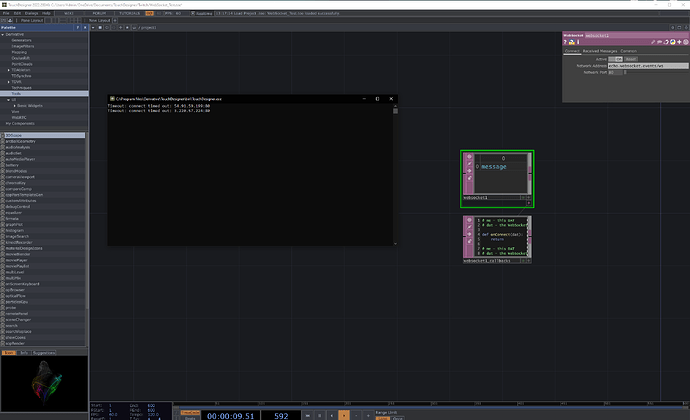 I’ve looked into it but haven’t found the cause yet, and I have yet to reproduce.

From running the signalingClientCOMP example, it looks like it works between processes on the same machine for you. Does it work between machines on the same local network?

Do non-local WebSocket connections work for you outside of TD?

My current TD version is 64-Bit Build 2022.29850 on Mac
Hey there, I am having the same problem here. I made a ping-pong test in the websocket. I test it out with websocketking, I can both receive and send message through the websocket. But I cant seems to make it work in Touchdesigner. Dou you guys have any idea? Cheers

I’m on 2022.31030 and having issues setting up a non-local WebSocket. Can connect with other web socket clients (Chrome/Postman) but can’t connect in TouchDesigner websocketDAT or socketioDAT:

Postman echo test also seems to fail in Touch, but not in other clients:

Perhaps something is wrong with my syntax? 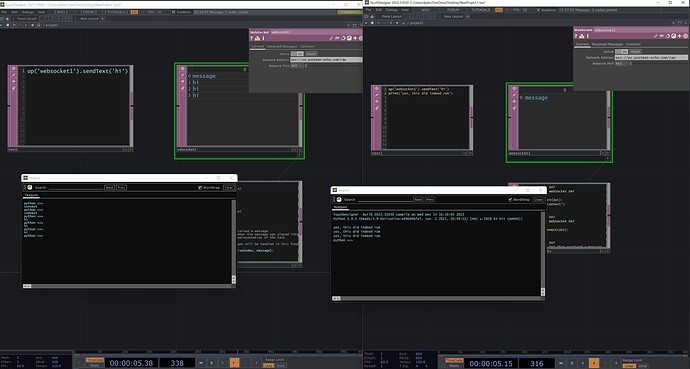 I took another look into it today and found a bug that could be the cause. I implemented a fix here:

Could you test with this build and let me know whether or not it fixes the issue for you? I’ve been unable to reproduce the issue on my end so I’m not able to verify the fix.

Hey @eric.b, thanks so much for looking into this so quickly!

We are unable to reproduce with Postman echo, this is an odd one.

Can you confirm that there is a rule set to allow TouchDesigner in your Windows firewall settings ? Or the firewall is down ?

Can you reproduce on another machine reliably ? 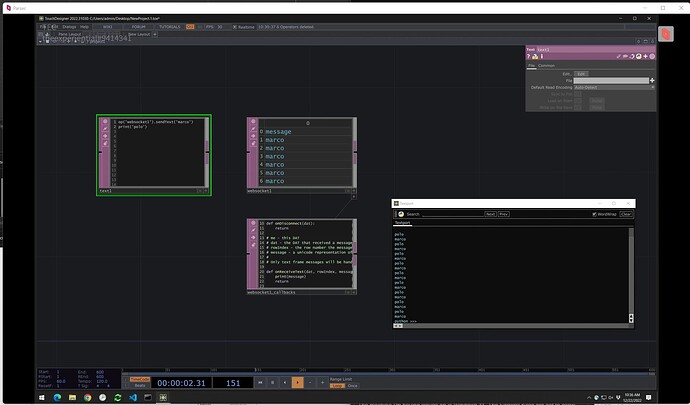 The machine I’m having issues on is Windows 11. The Firewall rules are set to allow TouchDesigner:

I do have VPN network interfaces, but they’re not currently in use. Just the normal WiFi interface for now:

Yeah I was on Win11. I’ll test on a couple other machines tomorrow.

What kind of router are you using?

This machine having issues is on Wifi, is the machine you parsec’d in wired ?

Sorry for the random questions, trying to see if there is a pattern somewhere.

I gave this a try on additional machines (on a different LAN) and I couldn’t reproduce the issue either this time around.

On those TouchDesigner items in your firewall, can you click on them and then click the “Details” button ?
See if at least one of those is pointing to your build?

The machine having issues is connected to a regular consumer modem/router in Poland. A Technicolor CGA2121, to be exact.

The Parsec machine is on a wired Ubiquiti router in downtown Los Angeles.

What’s strange to me is that older builds of Touch work fine on this computer. Did much change in the websocketDAT between pre-Vulkan and post?

There were some major changes to the WebSocket DAT between 2021.10000 and 2022.20000, however it’s not clear to me how those would cause such sporadic network/connection issues.