I’m progressively testing to run everything on the same computer but I’d prefer to keep room on visuals computer for eventually doing more complex visuals, recording in real time.

Visuals depends on sound analysis and on midi data coming from the audio computer.

The first option would be safer, sound wise (even if I tested and I don’t have jitter or whatever, when I use Dante Via) BUT of course, I’d have latency between the sound we hear, and the trigger we trigger from audio computer to visuals in TD, this latter would be late over audio.

The second option would keep the triggering accuracy closest to audio (if not accurately completely synced to audio). BUT I’m afraid of sound alteration.

I also have noticed some weird things like: If I collapse the TD window in which my network is running, sound shuts down. Then, if I make it visible again, sound appearing again. 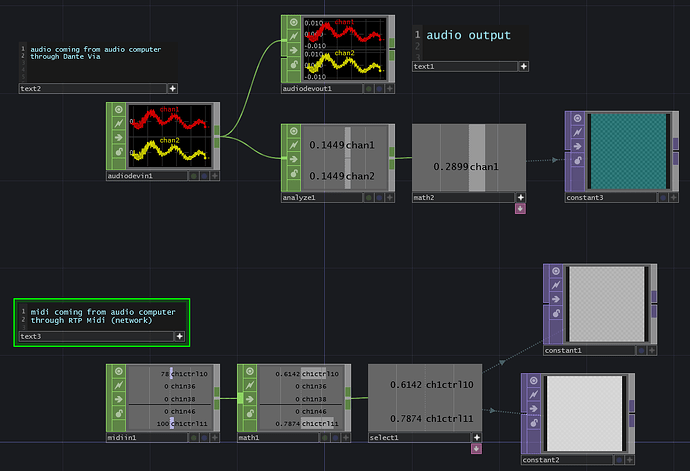 Any real-life stage or studio experiences with that “kind of” sound coming from another computer through Ethernet network and popping out from TD (in order to reduce sync) ??

Actually, that would be kind of ideal situation for me as I could do every sound analysis in TD, also record my audiovisual flows in TD too etc.

Actually (bis), in live situations, I could also pop out audio from audio computer AND delay it a bit with a constant amount (offset adjustement at each live performance start check, for instance) in prder to make the sync ok. and in recording condition, I could record audio on audio computer while sending it like I exposed, and record only video on TD computer … and sync that later at authoring stage… yes. why not ?!

I know ideal situations don’t exist for real, just trying to approach the one that could fit the best for me (but that’s very usual case, I know)

As of now the best ways I’ve found for getting audio between machines are dante or similarly voicemeeter, and both of them have inherent latency issues. On the same machine, I have slightly better performance using UAD hardware and their console app with virtual channels, but you take the cpu hit of doing the audio on the same machine and run into focus priority issues depending on which app is in the foreground, but with a beefy enough machine, it’s the best latency performance

I think I’d take benefits of my two machines.
The biggest one being for visuals only. maybe sound analysis too, in TD (or Max)
And probably popping out the audio directly from sound machine. Not ideal for directly recording to movie file out.

For rendering video, the only way to be sure it’s as pristine as possible is to kick it out in TD with realtime disabled; this guarantees no dropped frames. Obviously this isn’t an option for streaming or performance, so having separate workflows is the best answer. When the priority is video quality, kicking out your audio and midi data from ableton first and then rendering video in it’s own pass is my solution.

For performance and streaming I have come to accept the reality of latency, and use a hybrid approach favoring midi or osc triggers over FFT; this gives me immediate response for events, with an acceptable delay on analyzed audio reactive stuff