Bring back the /extract option available on installer prior to 2020.23680

The /extract feature of the previous installer was pretty handy. It allowed for fast extraction of all TouchDesigner required files immediately in the folder within which the command is executed.

It allowed for fast deployment techniques and as it didn’t do a “proper” install, it didn’t add a ton of registry entries nor did it open a GUI.

It allowed as well for packaging of the correct TouchDesigner build along project in a fast and efficient way. It allowed as well to package an extracted install in a GIT LFS folder alongside the project repository / files / folder.

While I can understand the benefits of that new installer, it’s a bit of a bummer to have that handy feature gone.

I can do the procedure manually by copying the files after install, but slightly worried that I am missing something and that on a fresh system that never had TouchDesigner, something might fail because dependencies are mising… (like vcredist and such… )

+1 on the /extract, however another similar question I have - Is the new installer capable of being installed via another installer silently? I have been packaging up TD in my own installer like this in advanced installer: 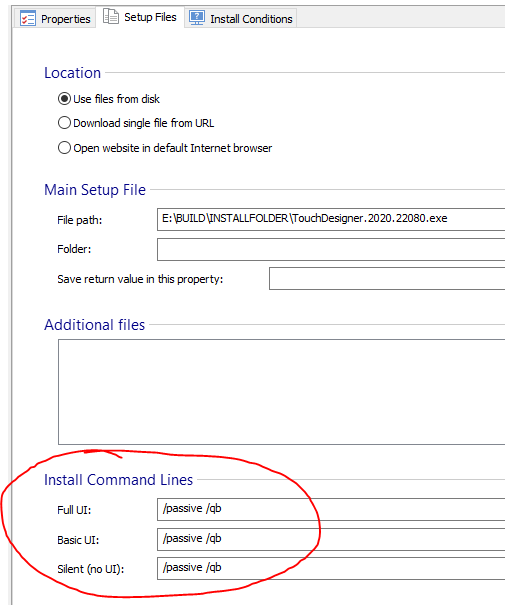 Wondering if this will still be possible in some way.

while not fully documented and subject to change, currently there is a switch /OnlyCopy=yes which allows for bypassing any registry entries and combined with the described command line switches all the same functionality should be there. This also includes silent and very silent installations.

That switch is not fully implemented yet (hence not documented) - for example you currently have to add the /DIR switch as otherwise it will unpack into the default program location.

To unpack all the extra files included in the installer, you can use software such as innounp

For reasons of speed and flexibility we have switched to an innosetup based installer. Part of this development is an “installer builder” which can be used to package up your project with a specific version of TouchDesigner as it’s own installer.

Thanks for the quick answer Markus.

So combining /OnlyCopy and /DIR should give us the ability to reproduce the behavior we had with /extract before, if I understood all those points correctly.

I “fixed” it:
the next version will have an /Extract switch:

+1 for the /extract
Thank you!

Hi @snaut,
Any news on this possibility to package a whole project into an innosetup installer ? If this feature is not ready already, would you have some good insights on how do to it by myself ?
Best,
Colin.