I’m currently losing my mind trying to figure out how to create a CHOP system that basically pulses only one time once it hit a certain threshold. I’m receiving data from a TDAbleton Level component, and I want to trigger an effect that only occurs for a second once the track starts playing. The problem I’m having with the trigger CHOP is that it will hold the effect for as long as the track is sending an output, but as I said I only want it to happen once when the sound starts and when it ends.

I hope I’m making sense. Would gretaly appreciate any hints!

I only want it to happen once when the sound starts and when it ends.

Not familiar with TDAbleton, but consider using a CHOP Execute, and trigger it only on these two cases: 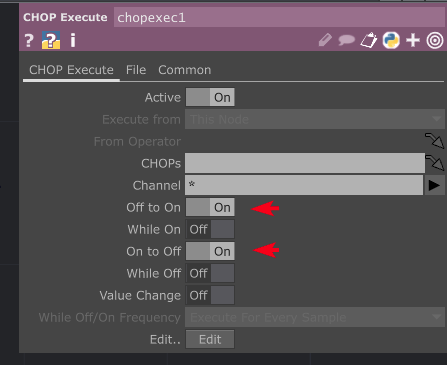 and then a bit of python to pulse the trigger chop: 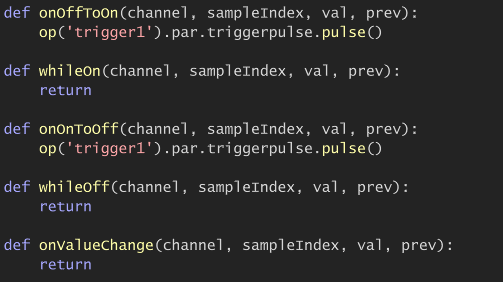 Is that helpful at all, or do you need something a bit different?

@timhunkemoeller The sustain and release parts of the ADSR curve are what is probably getting in your way. If you set Sustain = 0, then it will not sustain any value no matter how long the input is ‘On’.

So for 1 second, make Peak Length = 1.0. Tune Attack and Decay length if you want a little ease-in/ease-out, but in this working example I simply zeroed then out for hard cuts.
trigger.tox (734 Bytes)

Thanks Matija, I’ve never worked with a CHOP execute before but now I will definitely try it out. Also pushes me to get more into python.

Hey Ben, wow. This is exactly what I needed. And now I also feel a little silly because that is literally what a sustain does. However, guess it was a little late yesterday.