Making the discourse forum logo white and the header dark would improve readiability for those of us using dark mode:

A good example of this solution is Notch’s discourse:

Where we talk all things Notch

i think this to myself everyday

Yeah the dark and light modes were never meant to be released, (ie it was never setup), but when we launched were still active as a Discourse default. Of course some of us like the dark mode as well and since it’s mostly functional we left it available. We have this logged as something to fix, but its pretty far down the list of priorities right now. You’ll be the first to know when its fixed! 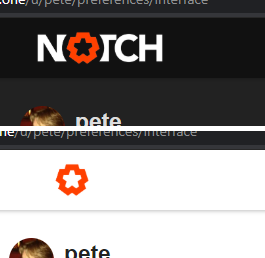 You better go post a bug report in their forum too!

@Peeet Haha, cheers to that. Why do they even have Light mode enabled?

You’re a brave man for trying that menu option.

@ben All good, hope this helps once time opens up to resolve the issue: https://github.com/discourse/discourse-alt-logo