So I was doing pretty light work and playing around on TD until now and didnt really pay any attention to frame rates as such. Yesterday I followed a tutorial by Simon Alexander on Instancing, and my frame rate went down so bad. Its just 6-8 fps. I thought I had a decent Laptop

Is there something Im doing wrong or this laptop is not good enough ?

maybe easier to judge if you post your network - as any computer can be brought to its knees if your network is heavier than your hardware can handle. Also recommended to download and install latest nvidia drivers and make sure you uninstall any bloatware from your machine like geforce experience, virus scanners, and what else may be (pre)installed and running in the background.

Hi thanks for your response. I did uninstall geforce experience but did not help. Posting the network. Please see if you can find something in it. Thank you.

Also the drivers are up to date and no unnecessary bloatware installed. Screenshot attached of the performance not sure about the usage of memory, is it supposed to be fully utilized? 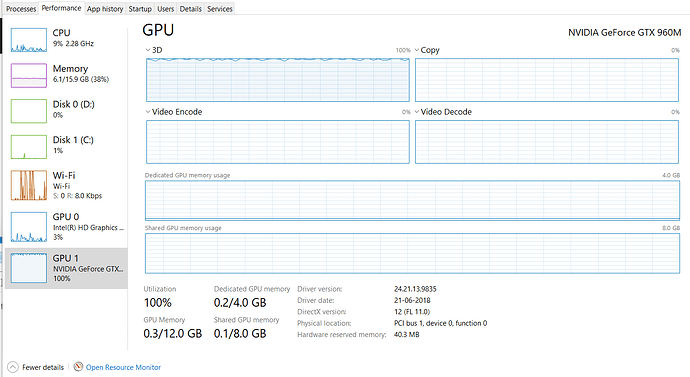 Took a look at this example the issue is just that you are pushing your GPU too hard.

First, the SSAO TOP is extremely heavy operation. You will see a major decrease in fps as soon as this TOP is used. You can change SSAO Pass Resolution = Half to make a noticeable improvement in frame rate for a slight drop in quality.

But I understand you want the SSAO look for this, so next lets look at the other reason the GPU is under pressure.

So, keeping the 10000 instances, you can drastically reduce the number of points in the tube you built. It doesn’t need for than 2 rows and then you can use a Cap SOP instead of 2 very dense spheres to cap the ends. This setup results in only 695 points as you can see in tube2 and cap1 in this file Tube_visuals.3.toe (7.2 KB)

This change alone gives my GPU about 40% more headroom.

Furthermore, The columns of the tube do not need to be set to 40 divisions. Since the tubes in the effect are so small and far from camera, 40 division is unnecessarily high as the extra detail can not be resolved from that distance. You can drop the columns down to 20 with reduces the number of points in half and notice almost no change in quality, getting you another 20% in GPU headroom.
Your GPU capabilities are different than mine, so play with this column parameter in tube2 until you get a reasonable frame rate on your system. Or you can also reduce the number of instances if that doesn’t help enough.

Of course, the SSAO TOP is the main offender, but if you want to leave it on you’ll need the balance the rest of your project by reducing the amount of work the GPU is doing with the geometry. Real-time is all about finding the limits of the hardware you are using and building something that works with the system you have.