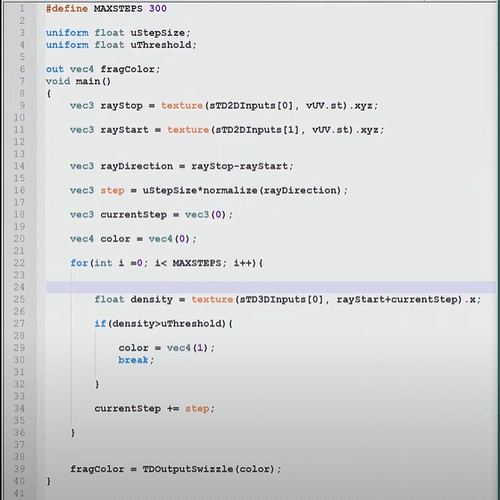 I understand up to 14 line.

But I don’t understand it from 16 line

And also why do I have to normalize?

I think I don’t know the definition of normalize

In line 25 Why dose He add ‘rayStart’ and ‘currentStep’?

What exactly is the meaning of the 30th line ‘BRAEK’?

I’m still not used to glsl.

Thanks again for anyone that helps.

Then in line 22 a ‘for’-loop starts. Check out python ‘for’-loops first if you dont feel you understand this loop thingie. It’s similar in most programming languages and comes down to loop MAXSTEPS times and increasing i by 1 every iteration.

The line 30 ‘break’ statement is used only in these kind of loops and means to jump out of the loop. So if density > uThreshold then break out of the loop (even if i is < MAXSTEPS).

To jump back to line 25. What it does (in combination with the loop) is it starts at ‘rayStart’, adds ‘currentStep’ to it (which is 0,0,0 in the first iteration). Sampling the density from the texture and then in line 34 it adds the ‘step’ vector we just calculated (ray direction & length of uStepSize).

So in other words it ‘walks’ or ‘marches’ over the ray/line from rayStart towards rayStop with ‘uStepSize’ steps. Tests if a certain density is reached, if so it breaks the loop.

It can be a bit confusing at first with doing math with vectors (linear algebra). A very good introduction to the topic is the course of 3blue1brown. (https://www.youtube.com/playlist?list=PLZHQObOWTQDPD3MizzM2xVFitgF8hE_ab)