Hi friends,
Once more I’ve exhausted my resources and research ability, and can’t find anything regarding this- and I’m sure it’s one of those things that is very easy to do- thanks to the team that created TD- but I’m stuck.

I’m still new and only know what I know.

I’m working with a Hans Zimmer song (for practice not actually going to use it) and it’s filled with swells, tension, rising and creeping harmonies.
I wand playback and other actions are controlled with Kinect gestures.
Then, I have a video that CUEs and moves forward using audio reactive beat detection, which I created and edited in a way that as it plays it gradually forms into a final work, but slowly from nothing to a lot of visuals.
I’m cheating for now, in trying to make it look, with clever vid editing, like something I’m sure TD does, for now.

Now I created a project and want all 3 BASE (which I’ve converted to TOEs) to interact.

Here’s what works VS what does not, and what I’m trying to do.

NOT WORKING:
The kinect and tda are 2 separate TOE/TOX setups and they interact fine, but not producing the audio reaction to the 3rd TOE/TOX that is expected.
For now, lets just call them 3 TOX in one network, and I want to stay away from any intercommunication that involves web or tcp/ip type stuff. The more basic and contained the better for me as a semi-beginner.

One last note, when the working (standalone) audio reactive video works, it is comprised of an AUDIO IN FILE playing a song, and various operators doing funky things, that lead to a MOVIE IN/OUT ending cue the video. I’m using the AUDIO ANALYSIS component that comes built in.
I can adjust levels and have SELECT chopped just the KICK and SNARE to move the video forward.

Why won’t this work between different TOX (or as I see them also 3 separate BASEs) in a way that Kinect > TDA > AV-reactive BASE?

I noticed inside the AUDIO ANALYSIS component, it has it’s own AUDIO IN Chop, and one of the issues I’m running into is that it seems to default and want to play THAT instead of the music coming in from TDA when I’m trying to do the setup I described.

If I have a put an OUT going from TDA (my 2nd BASE) to an IN to the AV setup (3rd BASE), my thought is to then plug that into the AUDIO ANALYSIS, and it will pick up audio no different than it does from an AUDIO IN FILE in it’s own BASE. Well, it does not. The sliders in the parameters move like crazy, but not from the sound coming from TDA. Even on pause, they move, and that’s how I noticed if I go inside the AUDIO ANALYSIS chop itself, it has a file in there always playing.

I’ve tried deleting the file inside the AUD ANALYSIS chop, and different options with IN and OUTs from the main base.
I’ve tried leaving it as is, and like I said and OUT from the TDA track in the TDA BASE to an IN in the AVreactive BASE.
I’ve tried FILTER, AUDIO SPECTRUM, and almost anything that says ‘audio’ in CHOP, as well as almost anything else that has worked in the audio reactive setup and Kinect/TDA setup, but can’t get it to work.

What I did notice is when the AVreactive standalone project works, it seems to be getting the KICK/SNARE/HI/MID/LOW from the AUDIO IN file I’m playing and turning it into 2 channels, then from there I have that going to the AUDIO ANALYSIS and SELECTS and the KICK and SNARE doing things to ultimately control the video.
However with the 3 BASE/TOX setup, the audio coming from TDA into the AV setup/base, comes in as all the things Ableton outputs (ie track, volume, level, play, mixer, etc.)
All I’m trying to do is replace the AUDIO IN FILE within inside the AVreactive TOE with the audio coming out of the TDA, in a way that it does the same thing as the AUDIO FILE, and move along the video then.
Not working!

Screenshots are of the 1- non-working AV setup

2- the non-working TDA setup (which is controlled by Kinect from an external TOX- the interaction between these 2 is fine, just not the OUT to the IN of the AV setup that I need.)

3- a high altitude shot of the initial concept of the 3 BASE design.

4a&4b - the thing I said about the AUDIO ANALYSIS component and a dive inside it with it’s as-is own audiofile (which I don’t know why it works when I just do the AVreactive setup and sort of bypasses that little file inside it, and plays the audio file in the TOE to I made see screen5 for the example of it working alone, without this 3BASE thing I’m doing.) *Screen4b is inside the AUDIOanalysis component. 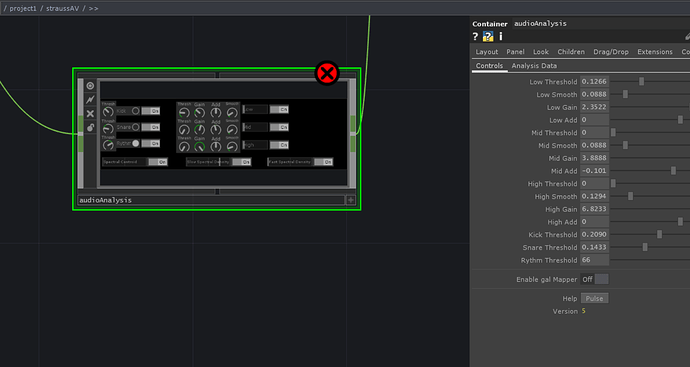 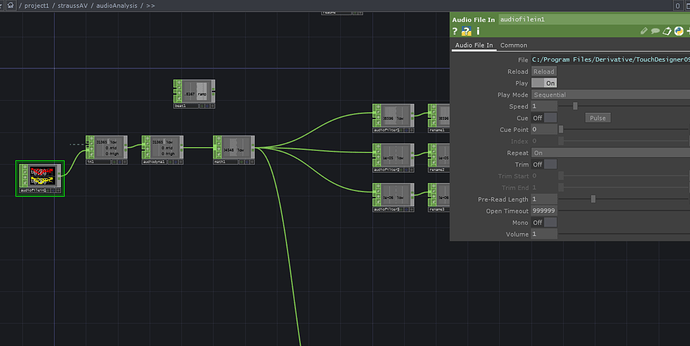 5 standlone, with no other externals, just a basic audio reactive beat detect setup that controls a video.

You’ll notice that the layout in 5 (working) is pretty much the same as in screenshot 1 (notWroking) layout.

All I’m trying to do is replace the audio in there, with the audio coming out of TDA setup, and for it to function the same (detecting the KICK/SNARE?MID/LOWS or whatever).
It’s doing weird things and the audio instead of showing as 2 channels is coming out as EVERYTHING that is coming from TDA- plus if I try renaming channels and just use 2 o3 things coming from TDAsetup (like levels or Rlevels Llevels, it still does not detect kicks lows snare, etc.) Messing with the parameters of the AudioAnalysis does not make it more sensitive to detecting anything related to the music/audio- so I’m exhausted and frustrated that I can’t find the right combination to execute this simple function.

Please help!
And as for the Kinect BASE, that seems to be something I deduced to leave out of the troubleshooting, since all that is doing is controlling the TDAsetup, and what I need is the TDAsetup audio controlling the Video in the AVreactive setup, in the same fashion it does when it’s just a standalone TOE (meaning not a project that includes TDA or KINECT.)