After updating to the most recent version of TouchDesigner (2021.12380) on my 2017 MacBook Pro, I noticed that the default output ranges from any of the axis or rotation channels of the Joystick CHOP are no longer falling within the usual [-1,1] axis range but instead have very large, seemingly random ranges applied. Even when the Axis Range parameter is changed to the [0,1] setting I am still getting values that are far outside of that range.

For example, without changing any settings within the Joystick CHOP the xaxis channel is putting out a range of (0, 65535) and sits around ~34000 when the left analog stick of my controller is centered. I’ve attached some screenshots below of what the output is looking like for me. The left image shows the controller with the analog sticks centered and analog triggers in their default position, and the right shows some movement of both.

For reference, I am using an Xbox One controller connected via bluetooth. I have had a friend test this with a PS4 controller on the same model of laptop and same TD build, which also resulted in the same issue. Finally, I’ve tested the Joystick CHOP with the Xbox controller on an older 2014 MacBook Pro with the same TD build and received the same results as above.

I have also tested the Joystick CHOP on the previous build (2021.11180) with the same Xbox controller and laptop, and it is functioning normally. In this build the output ranges are falling between [-1,1] or [0,1] depending on the Axis Range parameter setting.

Please let me know if you need any further information! 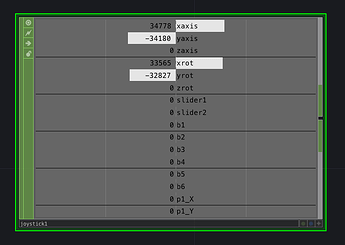 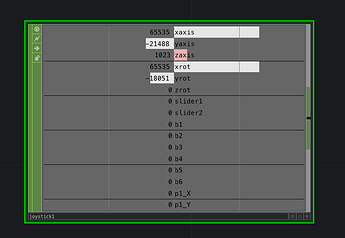 Thanks for the report, we’ll look into this.