about the “edgy” lines you mentioned,
would it be possible to assign some sort of “anti aliasing” to it?

i’m very new to TD,
so i can’t give you a detailed hint how to approach this…

all the best,
Roman

it’s a little tricky with Anti-Aliasing and UV Maps: If I apply anti-aliasing on the uv map there will be a seam on the edges as the UVs are direct position lookups into a texture.
If I apply Anti-Aliasing after the lookup, not only the edges of the texture will be anti-aliased but also features in the texture itself… But there must be a solution to this and I probably just don’t know what to search for in terms of a solution…

Could you not edge detect and apply AA to that Markus?

To better manage the antialiasing of the edge, can you set the render size of UV map to 4-times the resolution, and scale it down? The Remap TOP is a low load on the GPU.

Request For Enhancement:
for large scale LEDscreen mapping, where we get an exact pixelmap in a complex pattern on a 1920x1080 image from the LED supplier which needs to be mapped, we have to enter all the exact xy coordinates for the mapping.
So now that we have the Parameter Comp, for version X in the future maybe it’s an option to use standard TD custom parameters for scale, translation and rotation in MottoKantan. They have the added benefit of great value ladder options and exact number entry. This would enable very fast&exact mapping of such a pixelmap.

Thanks for your feedback!
Do you have a template that you could share for me to see what you usually would be handed from a supplier?
Would it be useful to be able to feed a Table DAT with all the coordinates, sizes and potentially uv lookups specified?

about the coordinate talk…

i think a good way would be to select a key/corner and then have their position coordinates displayed and be able to edit them within kantan. Dragging around keys and placing them just by eyesight is a bit sloppy. I could see a Table DAT being used as well, especially if you want to move the keys through some remote control.

I think one way to enhance the dragging around keys or whole shapes would be to have a magnet/locking feature you can turn on, so edges or vertices can stick to a nearby edge/vertex if it’s being dragged within the vicinity. but this may not be the simplest to implement nor is it necessary if you can directly edit coordinates.

I made an example of how a 1920x1080 pixelmap could look.
The VJ in the front of house needs to send out this 1920x1080 videosignal to the stage, and on stage is a LED-processor of the LED supplier which translates this video to all their ledpanels.
So video needs to be placed pixelperfect according to this pixelmap.

I hope I made it clear, maybe it can be of inspiration to you!
cheers,idzard 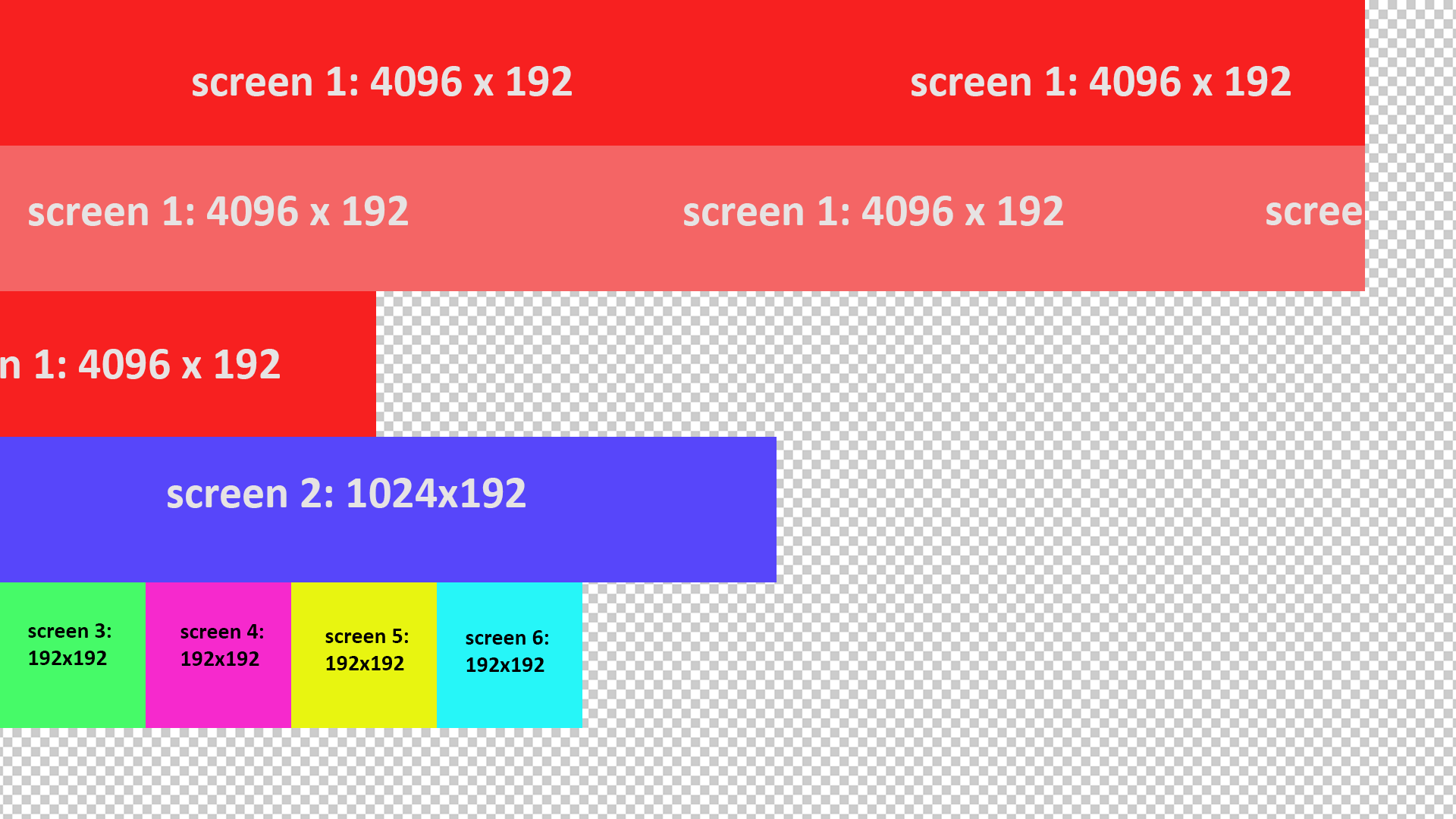 ya, i mostly agree with everything said above, the snap suggestion was what i was saying about magnet/locking, so i guess other people besides me find it useful

the math entry is a good suggestion, saves me time having to break out a calculator.

one other thing i’d like to add is perhaps an ability to make different mapping presets. what i mean by this, take idzard’s pixelmap for example. say for one preset, i want screens 3-6 to be separate images, but another preset i’d like for one image to be spread along all four screens. I suppose having multiple kantans and selecting between them would be a current solution, or if each screen was referencing a null top, and then i could just change what video i sent to that null top… does anyone else think having mapping presets that you can trigger between might be useful? i’m sure there are other use cases besides the one i described above

Thanks for the examples.

For a next version I can add:
[]Clicking ones onto the canvas when creating a rectangle would open up a dialog which let’s you set size, pivot and position
[]A translate field which would always display and let you adjust the x/y position of the shape measured by it’s pivot
[*]Editable X/Y positions for individual keys

Snapping would be great and renderpick should help with that. camSchnappr uses that approach - I’ll see if I can implement it in Kantan as well.
I also like the edit field in Sketchup which lets you always enter an specific amount of transformation, be it when translating, rotating, scaling or creating copies. As these can work as offsets, this would simplify the way you create and place multiples of the same shape without having to do much math.

If you don’t want to wait for me to implement all of this, feel free to dive in

Thanks again for all your input - this is greatly valuable.
Cheers
Markus

The full-span crosshair that shows on the output window seems to be scaling its vertical position from the center at a > 1.0 factor than the mouse on the control UI. So basically if I hover over a point that is in the upper half of the screen on the control window the crosshair on the output window will be above that point and below if the point is on the lower half of the frame.

Some sort of panel aspect/scaling issue I assume. When you take the mouse to the actual output window the crosshair displays in the right place…

immersive update to kantan, markus.
gratuliere!
it looks like your on the way to be a madmapper killer!

Thank you for this awesome tool.

I’m having a strange issue where MottoKantan is duplicating my shapes/layers.
Somehow after working with my project a while, i end up with 10 or more copies of some of my layers. Anyone else have this experience?

I also have a very simple question that I can’t find an answer to:
How do you DELETE a shape or a group of shapes?

UPDATE:
A shape gets duplicated when you try to move it!
Or if you try to grab it’s yellow corner and rotate it!!!

this is rather strange, the copy transform is a function for when you hold down the ALT key and transform - i’m guessing somehow for you it always happens?

deleting shapes can be done with the delete key.

immersive update to kantan, markus.
gratuliere!
it looks like your on the way to be a madmapper killer!

Would it be possible to have a “Perspective” option in the “Edit Texture” window as well? That is to say, so the UV’s from the edited texture are mapped to the quad in a perspective correct fashion?

isn’t that doubled up if your quad is set to perspective then it should apply the texture in that fashion. If we would try to have the Texture Edit in perspective mode as well we would get perspective^2?