Hi, I installed Touch Designer about a year ago, and removed it pretty soon after (sorry pals) by deleting from my Applications folder.

I’ve had this weird behavior consistently ever since.

When I plug in an HDMI cable, the Touch Designer Online End User License Agreement pops up.

I can’t select any of the buttons at the bottom of the EULA (Print/Save/Disagree/Agree)
I move it to the corner of my screen but eventually programs often freeze up and I have to force restart my laptop.

Restart is the only way to get rid of the EULA too.

I haven’t worried about it so far due to not usually using the HDMI port-- but now I’m using it more often. It happens with multiple other devices + cables.

I don’t have any other buggy behavior on my computer.

I am using:
MacBook Pro Mid 2015
Currently on OS 10.15.5 (but the problem has persisted through OS upgrades)

I have looked for Touch Designer files on my computer to remove but not succeeded in finding them.

I am comfortable searching through the root directory with the shell if you can point me at some locations and file names.

I have screen shots and would be happy to make a video of the behavior if it’ll help.

This is very strange. Does the EULA show up on the monitor that you just connected, or on the already connected monitor? Somehow that .dmg must still be on the system and mounted.

Using ‘hdiutil info’ from the terminal window may show you the mounted images and where they are.

I noticed you are spelling “Touch Designer”, but it is actually “TouchDesigner”. Wondering if that would help in your searches. 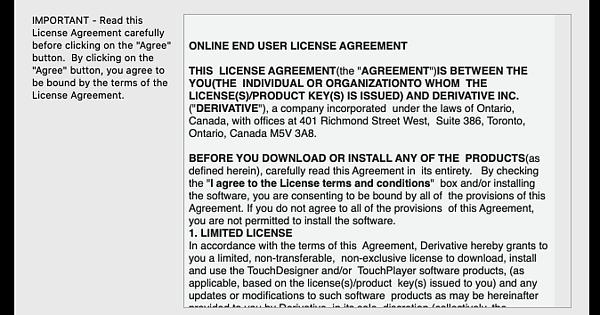 It shows on both screens (but that makes sense, since they’re mirrored)

Here’s some more from the command line:

could these be problematic files?

@malcolm I ran hdiutil info but I don’t think this is what you meant?

I tried using htop when the license agreement popped up but didn’t see anything with dmg, touchdesigner or derivative.

Any other ideas of things to poke around?

The Application Support folder stuff is normal. Definitely seems like you did something with homebrew. I’d say this is very likely the issue but I’m not sure what it could be. I didn’t even know there was a homebrew for TouchDesigner and we arn’t involved with it. I’d try cleaning up your homebrew somehow.

It’s not listed under the homebrew installed applications (brew list + brew cask list).
I don’t think that’s what I did since the dmg version doesn’t match, though I pulled the cask script down.

Looking at the file, it looks like it just downloads the version from the derivative website and checks against a checksum.