HI ALL!!!
why the computer with 40 GB RAM and with the video card NVIDIA GTX 760 has low fps in TouchDesigner default scene? FPS runs between 45-55 fps
Im working in TD more then 3 years but did not have such bad resaults in fps speed.
I had different computers and laptops.
Maybe codec?
Or videocard not optimized to work with TouchDesigner?
I would be very grateful if you help me)

The first thing I’d check is that you are running the latest drivers from www.nvidia.com. Is this a laptop or a desktop? I’d also check the power saving options to make sure you arn’t running on a low-power setting

The default scene FPS in 2 secounds changing in realtime from about 47 to 55(60) and back.
If I start default scene one more TD fps going more low about 35 to 50

Thanks a lot for your help.
I install new driver NVIDIA )
Start TD and see that FPS looks better but not ideal/ Now FPS 51 - 60 in 2 seconds changing.
sometimes going to 45 ( its not good.

I will check other system parts.

The plan B is to make one more computer with RADEON videocard with 1GB video memory on Sabertooth x58 motherboard.

The following is only applicable if you are using a laptop:
-In TD, place a Monitor DAT and see in the column “description” what video card TouchDesigner is using. if you see something like “Intel HD…” it means it is running on the onboard (slow) Intel GPU instead of your Nvidia GTX 760. Then you can try to set in your BIOS or in your laptop settings to set your Nvidia card as the default card.

Thanks!
In TD Monitor DAT
I see only Nvidia GTX 760 for DISPLAY1 (I have 1 monitor)

Be aware that the maximum fps you’ll get is linked to the maximum refresh rate of your monitor, which is probably 60hz. So you can’t use this as a benchmark. (You can disable vsync of your perform window to go beyond your monitor refresh rate, but you dont need that right now I guess).

My guess in finding speed is try to find if you have any other software/bloatware running (maybe in the background) which you can disable?

Hey guys. I’ve run into this exact problem on my MAINGEAR Element 3 (a Laptop)
Even in a blank default scene with no extra ops running, my FPS never breaks above 41FPS. 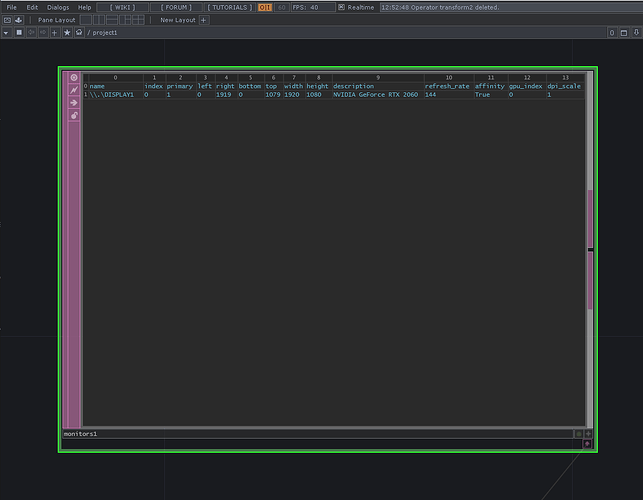 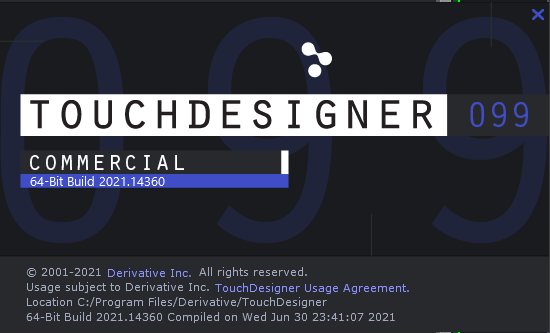 I’ve also followed much of the advice on this thread (Including switching to the dedicated GPU in BIOS) to no avail.

Neither Driver Updates nor TD version updates seem to have an effect on the problem. I thought I’d revive the thread incase there are any new ideas .

What does TouchDesigner’s Performance Monitor say when you click ‘analyze’.

What does the Windows Task Manager look like, are the CPU or GPU maxing out, or can you see other processes running at the same time?

As it turns out, my problem was the NVIDIA Studio Driver.
It doesn’t play well with Touch for some reason.

I managed to fix my problem by switching to the latest Game Ready Driver.
All is well with my FPS now. 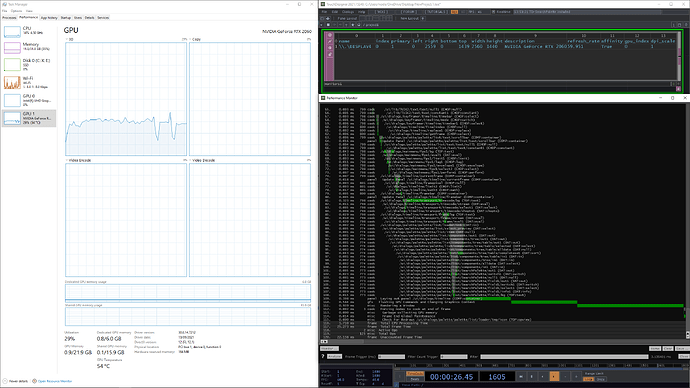 Screenshot (12)2560×1440 266 KB
Sorry Ben, I missed your reply at the time for some reason.
As it turns out, the problem is resurgent.
It seems sorted out for a few minutes after I update the Graphics Drivers. Everything gets back up to above 40FPS, but it all falls apart like clockwork the next time I open Touch. I’m not sure what to do.

To answer your question though.
Here’s a screengrab from an empty project

@scarletmotiff We discussed the issue here and have a few things to try.

Let us know if either approach offers any results.

Ben, Thanks for the quick turnaround on this.
As it stands, short of a full reinstall of Windows and uninstalling Steam, I’ve done what you’ve suggested.
I even set it within windows so that Touchdesigner specifically opens with High Performance graphics settings.
That being said, I really don’t get why changing the graphics driver sorts out the problem only momentarily. It might be something to do with my specific system.

This wasn’t a problem until 3-4 months after I got the laptop. And it seemingly affects nothing else.
I’ll keep an eye on things on my end though.

One thing to check, are the temperatures in your laptop in check? You can monitor temperatures of CPU and GPU using HWMonitor application. Perhaps something is not being cooled correctly, fans not working, etc.

I’ve had a similar issue ever since I updated my Nvidia Driver for a game that was having issues. I’m using a 1080 TI with driver version 496.49 this was also happening with another recent driver before this. Before a month and a half ago I had not updated my drivers in over a year and everything was running smoothly.

Now any time I move my mouse when using td the frames drop by half or lower going from 60 down to as low as 17 fps. That’s if it goes to 60 which seems very random when it will typically hover around 30. Changing the fps but that doesn’t help. It has also jump to 60 fps a few times when I go to type this post but when I go back to touch designer the fps drops again. This is happening with the default jelly bean project.

Edit: Just confirmed the frames actually stabilize when I select an html text box to type. So I think problem may have something to do with the cursor.

Edit 2: I changed my cursor from a custom one to default that comes with windows its now much more stable. It will do decently size drops when I move the cursor but now jumps back to 60 fps and stabilizes quickly.

Just side note, there are some GLSL bugs in the 496 drivers and we are recommending rolling back to the 470s until Nvidia releases a patch. Occurred just a couple of weeks ago.

ParticlesGpu is not working Bugs

After more testing on my end on a second machine, I can confirm that rolling back the Nvidia driver from 496.x to 472.x is solving the issue. The Line MAT is affected as well as mentioned here. If you rely on the particlesGpu COMP, I’d suggest that you rollback your driver for the time being while we wait for an update from Nvidia.