Hey there…
what a great peace of work…love it, many tnxs for shearing this beast!

1 question, (probably stupid but anyway, i’m just scratching the surface of TD)
how do i get my second monitor showing a fullscreen output from the master?

Jeffrey there is a toggle parameter on the component /Luminosity/perform called Master Perform On that needs to be toggled on.

Hi everyone, there is a new branch called experimental-update on the github repo. A number of things have been fixed and LM seems to be working for the most part in build 2019.12330

I’m sure there are still a few things that might not be working correctly so if you find any bugs please report them in issues section on Github.

I havnt hade time having a closer look but is it possible to drop toxfiles as a clip and display the toxfiles custom parameters?

Not at the moment. Peter Sistrom did make a component a while back that would convert a tox with custom pars into an LM control panel but it never made it into Luminosity.

It could easily be developed again though. Then either a manual conversion could be done prior to using the component in LM or function could be made to the call the CustomParsToControlPanel() function that automatically did on drop.

Ah ok. But it is possible to drop toxfiles as well as videoclips? Maybe I will try to implement the display of custom parameters. But need to dig a bit under the hood first to understand how the system works. I think this would be handy.

As well as implement kantan mapper so you can do mapping without a 3d modell because guess that is needed with cantanmapper right?

Thanks a million Keith! The world doesn’t even realize that the Ableton of visuals came out. You mention in the video you would like to see a community build around LM, I think this needs to happen, whether it’s a new section of the Touchdesigner forum or whatever. I know I’m going to be hacking it and making new features as soon as I can figure out how any of it operates, and we need a space where people can continue developing it together and documenting how to use it.

I actually have the same question, at 3 hrs 41 min of the intent dev YouTube video you mention you are going to do a demonstration of how to create a new effect but then don’t go into it. When in the the video do you explain making your own effects?

Will we need to add our own hack that keeps it from cooking all the time or is it automatically built in? Thanks

Actually how to build in an effect/gen is in a second video here:

Awesome, thanks, I didn’t see that.

I mean if we add our own effects and such, what do we need to do to make sure that their nodes stop cooking/running when we’re not using them in a performance? For example, I replaced the default scene with my own component that’s a bit heavy, and I’m paranoid that it’s still cooking while I’m not actually using its scene clip on a channel.

That depends on your network, but I’ve implemented an ‘Active’ attribute for that exact reason.

For most things if you simply aren’t viewing (or routing) them they won’t cook in TD, but if your not viewing something just because a level is down doesn’t mean it won’t cook. There must be a hard switch for it not to cook. There are some ops though that cook no matter what unless you bypass them and if other ops are connected downstream they will cook also such as timerCHOP, keyframeCHOP (when set to sequential or locked to timeine),renderTOP etc…

This is where I use the Active property in the in the inherited Plugin extension on all Luminosity plugins. If you build an effect or generator all plugins get deactivated when they are either off (effect) or not playing (gen) - that doesn’t mean your custom plugin won’t cook though, you still need to use the Active property to toggle whatever you want off. I think the Feedback effect uses Active as well as a few other plugins if you would like an example. A scene isn’t quite as straightforward since it’s a bit ambiguous whether it is being selected or viewed (there is no insert on/off button or trigger/select functionality like effects and gens) so if you want to deactivate your scene 100% while it is still selected within LMs routing system you should have an Active parameter setup in it’s controls to disable or enable it’s state.

Thank you Keith, this is incredible!

I’d like to use this on an upcoming show where I’ll be triggering other devices automatically using DMX at certain points within a single video clip. Is this possible?

If there isn’t a system in place, I was thinking I could build a generator plugin that plays back a movie file and has timers to fire DMX.

Glad you’ll be able to use LM for some your projects.

You could make a generator to trigger DMX channels/values, should be pretty straightforward. It will still need at TOP output but it could just be a constant texture.

There are a couple of other alternatives:

Thanks for the info Keith, I’ll look into these options and find one that works for us!

Great, thanks. I’ll have to do some homework and look into the active attribute.

I’ve noticed that midi mapping doesn’t work for turning effects on and off, or for selecting channels (I’m using selected mode). Is this some type of bug that there’s a workaround for? If not, where is the mechanism that toggles effects located so I can tap into it and map it myself? I’m starting to understand the geography of the network but I couldn’t find it.

To describe what I’m seeing, in Midi Mapper Mode, the effects slots have one map option for all 6 names, and one for all 6 toggles, I’ve tried both on both knobs and buttons and the map options don’t seem to change anything.

How do I change the project window size? 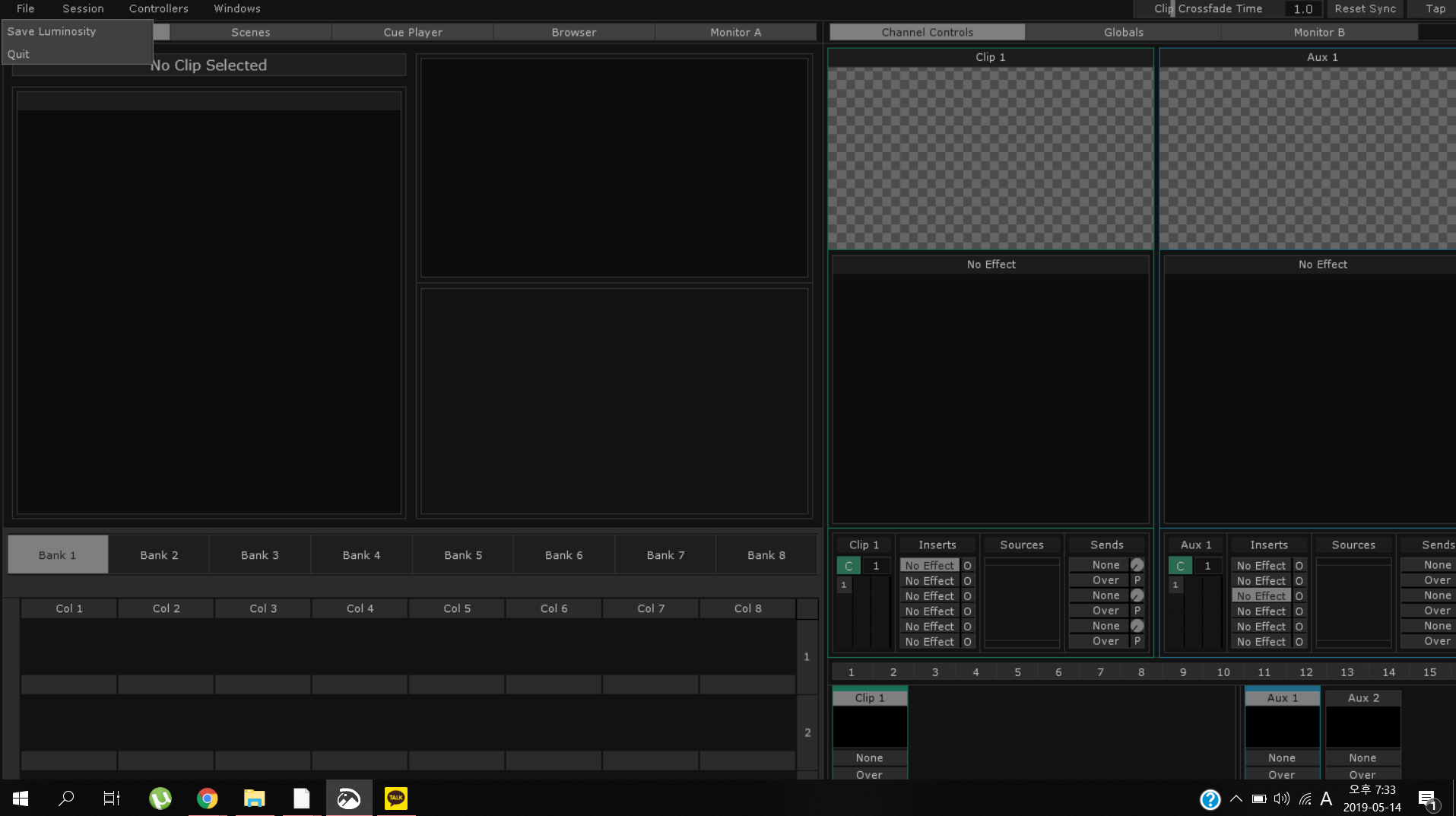 Hello, will you have any old version of this project to share?
the one on github doesn’t open anymore, it gives an error.
I wish I could give it life, since it was a great interface, thanks

Hey Keith! I love Luminosity! I’m still using it but was wondering if you had plans for updating it? Will you still be making a Patreon to support the continued efforts of this program?

@Flowtricks I’ve been involved in few different projects so haven’t had much time to keep up with Luminosity.

There is a branch here that works in the current version of TD decently. It setup for a particular project so you likely need to reconfigure the outputs.

Front-end for TouchDesigner aimed at providing operators with an efficient interface to perform, control, and distribute realtime media while retaining the open-ended programmability of TouchDesign...