I run a few instances of TouchDesigner for CPU threading reasons, but it can get difficult to recognize which one is which at a glance.

Would it be possible to set a custom taskbar icon color for a .toe? That would be so handy.

And/or for Window comps.

A trick I used in the past is to create shortcuts to each instance. You can set the icon of those, and those icons are the ones which are shown in the taskbar while running.

I’ve tried creating a shortcut to both the main file and the numbered iteration (since that’s what automatically opens), and changing the shortcut icon, but the icon in the taskbar remains the same (Win 10).

Does your suggestion still work for you these days?

just did a quick test and this trick still seems to work on win 10, the custom icon shows in taskbar.
You’ll need to create a shortcut which also calls TouchDesigner.exe.

So for instance your shortcut has this target:
"C:\Program Files\Derivative\TouchDesigner.2021.14360\bin\TouchDesigner.exe" "C:\Users\MyUserName\Desktop\mySampleFile.toe"

So the shortcut should have those two paths in quotes all in one line in the Target field, with a single space between them? And if the ‘Change icon’ is set, that’s the icon that should show up?

That’s what I’m trying, but not working for me. Doesn’t matter if the file starts in perform mode or edit mode.

Not sure what is missing on your end.
You can quickly test if it works on your machine by copy/pasting the existing shortcut TouchDesigner has placed on your desktop during installation. (if you don’t have it, go to the TD install directory, right-click TouchDesigner.exe, and choose Send To Desktop (create shortcut))

Change that icon and run it, you’ll see the new icon is showing in the taskbar (Not in the application window!). Now all you need to do is paste the .toe file path in the target, exactly like I wrote above. 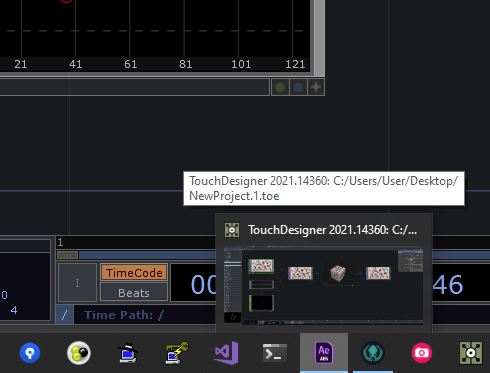 I really appreciate you generously taking the time to screencap what you’re seeing and explain it in detail.

I have followed the steps as you described, even doing it for just the app without an additional file path. The taskbar icon before launching the program and during the splash screen is indeed my custom icon. But as soon as the network editor opens, the icon changes back to the default TD one.

A strange thing I noticed is that the actual exe shows a blank icon in explorer, but the TD logo icon when running. It might have to do with the fact that this install was an overwrite of my very first one which used the default (no version name) path.

Anyway, not gonna pursue this workaround any longer, I’ll just leave it as an RFE, because I feel that the ability to quickly distinguish instances on the taskbar via either or both this Icon RFE or my other ‘Filename First’ RFE, would be helpful to anyone trying to optimize TD performance by running multiple instance.