I often use test scripts all over my project for when I want to quickly emulate an event/trigger. For example, if I’m making a Table DAT that logs the audience’s votes, I might create a script for filling dummy votes before I’m ready to make the full intake system. In these early stages, I’m often selecting these test scripts and hitting Ctrl+R, or sometimes I’ll make a button and use a CHOP Exec for when I need to run a script many times.

It would save me many clicks/keystrokes if Text DATs had a ‘run’ button on them, or maybe if double-clicking a Text DAT made it run(). 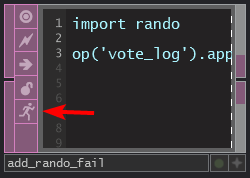 Anyone else think so?

ctrl.r seems just as easy… do you know about that macro?

If I need to run two different side-by-side scripts about a dozen times each in alternating order, Ctrl+R method requires one click and two keystrokes per action. So that’s 72 actions with Ctrl+R, versus 24 if each OP just a button. Now, if I’m also holding a controller with my left hand, the fact that I have to free up my other hand to run a script adds up.

As I mentioned, I often make a button with chop exec in lieu of there being a run button on the OP, if I predict I’ll need to test a particular script a lot.

My point is, I’m assuming that one-off scripts are a very typical thing in most TD projects, so wouldn’t a run button make sense to have natively?

I think the problem is it messes up the uniformity of that side bar… textDATs are the only dat in the class you would want to be able to do that for. If this is a big concern, it would take 2 minutes to build a palette tox component that is a wrapper container for your textDAT and has a run button

Yeah maybe. I don’t know enough about the design parameters of TD’s UI to know whether a side button or a double click or some other solution would work to afford us a way to natively run DATs with minimal clicks.

I mostly just think there would be a non-negligible benefit to having an even easier way to run multiple DATs in a single(ish) click each.