Every technical information in the topic. Tried to reinstall Touchdesigner no chance to get it running. I have to shut it down via cmd+alt+esc. Always the message Touchdesigner does’t react. Ah, btw. Rosetta 2 is installed on the Mini. Any idea to get it running? Or waiting for a new version and going back to my old Macbook Pro with Big Sur?

Hello and sorry for the delay.

Just gave it another go after the update and sadly I’m still unable to reproduce it.

Is it occurring with the default file / empty project, or are you trying to run a .toe file you have been working on?

I will see if it can be tested on another M1 machine we own.

Hey,
gave it also another try. Cleaned the Mac from everything related with TouchDesigner and made a new install. After double click the program I waited roundabout 5 minutes (checking alt+cmd+esc, TouchDesigner was red marked in the the list as doesn’t react), I ignored it, looked into the the console there was a crash report noting MIDIServer has crashed. After 5 Minutes! TouchDesigners main window with the NewProject.1.toe opened. I quit the program and started it again. It takes another five minutes to show up. Meanwhile the startup I opened the Force Quit Application window and also TouchDesigner was marked as not responding for about 4 minutes. Tomorrow I will check if it works without problems.

What is the CPU and GPU usage of TD in the activity monitor during those 5 minutes ?

Is there any other process with a high or very high CPU or GPU usage?

Do you see the splash screen? if you click on the progress, it will show a bit more details on what is going on, what do you see?

Did you try an older build ? How does it behave ?

During the five minutes the process ReportCrash appeared with minimal usage.
The crashreports of the console showed only crashes (4times every minute) of the MidiServer
MIDIServer [882]
Path: /System/Library/Frameworks/CoreMIDI.framework/MIDIServer

There is no other process with a significant high CPU or GPU usage. Chrome, Mail and Activity Monitor are the only running programs. Some agents and helpers (Chrome, DropBox) are also running, no suspicious usage of CPU.

The TouchDesigners splash screen appeared in the moment when TouchDesigner lost his status does not react in the activity monitor after the five minutes.

Thanks for the details.

Did you ever get a dialog opening from MacOS asking for permissions?

If you go to Apple → System Preferences → Security and Privacy

Do you see any mention of TouchDesigner in:

Can you also confirm that you are trying to start TouchDesigner with an empty project and not opening a previous project file?

Thank you for your time,

Did you ever get a dialog opening from MacOS asking for permissions? No

If you go to Apple → System Preferences → Security and Privacy

Do you see any mention of TouchDesigner in:

But after the clean install, it takes 5 minutes to open, if I understood correctly.

Do you have FileVault turned on?

Hi @Lichtschutzfaktor56
Once you see the splash screen, can you click on the words below the build number and they will expand into more details. Can you tell us what it “says” it is doing during that 5 minutes? 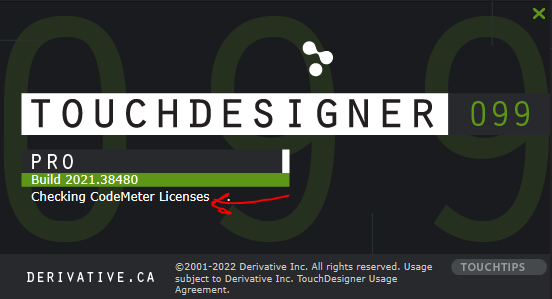 If I understand correctly, you don’t see the splash screen until after the five minutes have elapsed, so Ben’s suggestion might not be relevant.

If you are able, doing the following might help us pinpoint the issue:

In addition, it would be helpful to know if you have any other devices connected to the computer.

If you open /Applications/Utilities/Console, do you have any Spin Reports or Crash Reports for TouchDesigner listed? If you could attach or e-mail any of those, that would be a help too.

Sorry you’ve run into this!

so I’ve checked the startup. After 4 seconds the beachball starts spinning. the ball stops after roundabout 2 minutes and was performing 3 quarter turns until the process showed the splashscreen after 5 minutes. “Saying“ NewProject.toe
on click this appears: 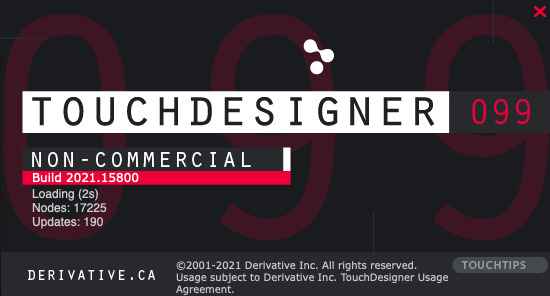 Regards Micha
Remark: I detached all the extern USB-Drive and the Hub. Also tried it with another new user, same behavior.

yes, it is right, the splash screen appears only after 5 minutes. In console I get no spin reports and also no crash reports for TouchDesigner. As you can see in my previous reply, I disconnected for the last check all external devices from the Mac Mini. Just found that I am, as new user, not allowed to attach files to the post, so I will send it via mail.

Thanks for the sample - very helpful. It looks like TouchDesigner is hanging trying to query MIDI devices, which makes sense with the crashes you saw in the system’s MIDIServer background process. Do you have drivers installed for any MIDI or audio devices, even if the devices themselves are not connected?

oh yes, there must be at least a driver for my Midisport-2X2-device. Short after reading your post I tried to look into The-Audi-MIDI-Setup and in the moment I select the Midi-window the application also crashes. Will have a deeper look into the midithingy. Let you know what I will find out.

the question about Midi-Driver nailed it! The driver for the old 2x2 Midisport was the culprit. “Schlurp“ burped the trash can and et violà, the TouchDesigner starts immediately. Seems I have to buy a new midi interface.

Thank you for your efforts
Michael

Glad to have solved it, but sorry to hear it means new hardware…

“Schlurp“ burped the trash can