^^Figured out my above issue - just wanted to post the fix here in case anyone else encounters a similar issue.

Touch is pull-based, so since the Null CHOP channel being referenced in the TDAbleton Song COMP was not being called for in perform mode, the Null CHOP was not cooking.

Going to the Common page of the referenced Null CHOP and switching cooking to ‘Always’ resolves the issue.

Thanks to everyone for their help and support solving this!

I see the notes on the Wiki - Cue Points (a.k.a Timeline Locators): abletonSong Component property LastLocatorPassed. Also available via callbacks.

What I am wanting to do is cue a visual and send a message to Live to start playing from a particular Cue Point - locator. At the moment I can only see a way to do this from Live to send ‘last locator passed’ and trigger the visual from Live.

The notes on the Wiki give me the feeling I will need a few Python commands - any way to achive TD controlling triggering of Cue points with a simple linking/triggering such as you can with Clip slots?

Trying to connect over network with TDAbleton - for some reason it works fine over Wi-Fi between two PC’s, but when I try to connect a PC running Touch to a Mac with Ableton, the connection is almost impossible. Has anybody had a similar experience/know of a more seamless way of connecting via TDAbleton?

Loving some of the new features In 1.18 Thanks!

One question … I Don’t seem to get any values coming into TD for TDA_Audio_Analyzer and TDA_Level COMPs … any special tricks to getting these working ?
I Can control the marcos from TD tho and see it working on the Ableton End …

I’ll dig into this next week.

I tested the audio analyzer and level COMPs and they’re working fine on my machine. I wonder if you have a conflict on the Max Port. Try changing that in the tdMaster component parameters and the TDA Master device on the Live master track.

We will no longer be releasing TDAbleton updates here in the forums. They will come out with TouchDesigner builds, so keep an eye on the build notes.

As always, post any bugs here or mention TDAbleton in the title if you create your own thread. If you have a bug emergency, I can send new versions separately so you don’t have to wait for a new build.

Hi, I started using TDA and ran some performance test. Quickly, I experienced performance issues while controlling some parameters on multiple tracks (18 tracks with 3 parameters per track being change @ 30fps). It seems that each module that I instantiate in TD (abletonChain, abletonParameter) cooks between 0.1 and 0.5 ms. Is there a strategy to have better performance for project involving numerous continuous parameter modification over multiple tracks?

Thanks, I’ll look into it.
I also found that if I turn Off all of the oscin_ of each instances, performance gain is dramatic!
Perhaps we could implement a toggle to decide if a Component is Send only. Would that make sense? 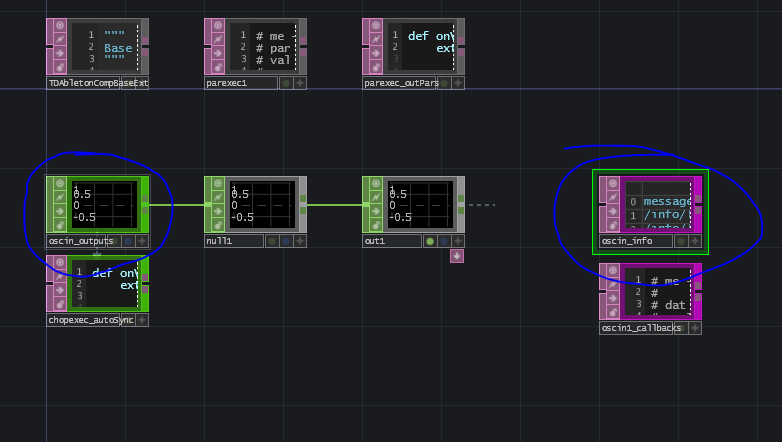 I will look into that possibility and also why those OSC nodes are taking so much time!

Have you found a solution for the cooking issue.
Alternatively, I was wondering if an OSC patterns list was available so we could bypass TDAbleton on TD’s side and output directly in a oscCHOP?

@barouet A couple things coming in the new version (1.21.0). Send Only mode on each component turns off incoming osc completely. Also, turning off Timeslice mode will make osc only cook when values are coming in. Hopefully this will help you.

There is no way to bypass TDAbleton completely, because it is the mechanism by which requests are made to Live for osc data. However, if you find ways to make the components more efficient, do let me know!

Great, thanks! Send Only mode should fix most of my worries concerning performances.

If you want maximum speed from TD to Live, definitely use the rack components and the mapper component.

I’m trying to debug an error i’m having with receiving the midiclip info from
ableton … .the text port says: (below)

Basically the midi clip info isn’t making in to touch…

any thooughts / tricks / clues on sorting this ?