Hello touch fam,
I am trying to display a lifesize model in VR but I’m running into a number of issues with scale. In addition, I’m curious if anyone can explain how the new TDVR rigs work and how one would set them up with an oculus instead of a vive.

For my scale issues - at first I was loading in an external model (obj, created in centimeters), having a main camera with a path sop tied to my models scale, which messes up some of the transforms and creates scaling issue (since the path sop made the camera scale with the model). Now I have a new setup, utilizing a null comp and using it’s ‘translate’ properties to move the cameras around along a path without tying them to the scale of the object (screenshot attached, only using translate here, not a path sop). But still I’m struggling to figure out why things look very close to accurate scale but feel a bit wrong. Tweaking the scale of the model has not yielded any good results.

Any ideas here? I think switching to the tdvr rig could help me here…

The issue you describe sounds almost certainly an incorrect interaxial distance between the stereo cameras being mismached to your real world interpupillary distance.

If your stereo camera separation is too large, the object will feel too small, giving the impression you are a giant. Too small and you will feel like a mouse.

It takes a surprisingly small amount of mismatch for it to feel wrong and it’s hard to set a general value that works for everyone.

It could of course just be you have the model scale incorrect, but its more likely a stereoscopy issue.

Here is the latest Palette folder for TDVR… This setup now supports Oculus or Vive on the HMD and Controller component simply by setting the menu. Its only been tested a bit so please give it a shot and let me know if you have issues.

Also please read these slightly out of date docs to get started. Most of the parameters on the top level have been cleaned up and the system has been made a bit cleaner so you should find your way through it.

All you really need is the TDVR.tox to get started - and set the HMD and Controllers to Oculus mode.
TDVR.zip (196 KB)
TouchDesigner VR Development Environment for HTC Vive.pdf (2.11 MB)

Awesome, thank you both!

Yes @ stateOfLux - I did think there was something wrong with the projection matrices provided by the oculus chop; I guess I can try updating the IPD? If different users all see the same issue with scale, is that really an ipd issue? Pretty sure it’s not model scale at this point so you are probably right.

I hope you are well, I have been working with your TDVR since 2016, left it out for a while and am coming back to it now. It’s great that you added Oculus support. To be honest, I would need a big refresher on it but my essential question is: where is that menu you are mentioning for switching to Oculus?
All the best, P 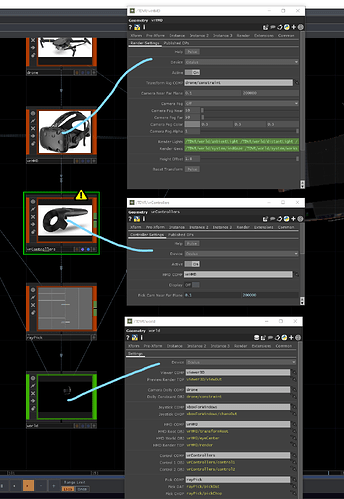 I hope you are doing well,
I am not managing to get a ‘buttonevent’ in any of the teapotExample objects when I am on the Oculus setting and not on the Vive Setting in your TDVR framework, it’s working in the ‘controllerScripts’ BASE but cannot flow through in ‘teapotExample’ objects. My python isn’t that extended. I could cheat and re-wire but since there is a forum, might as well use it.
Did I forget a setting for Oculus somewhere? Cheers, P